During 2007-2008 research was undertaken by JAAP Enterprise on the Seagram Series of paintings by Mark Rothko. First reports on that research can be found in the publications:
Jaap J. Boon, Material aspects of Mark Rothkos Seagram mural paintings, Desipientia – kunsthistorisch tijdschrift 16, 23-28 (2009).

The catalogue from 2008 also contains a list of paintings materials identified with mass spectrometry, sem-edx and ftir microscopy. Notes contain more information on the chemistry. 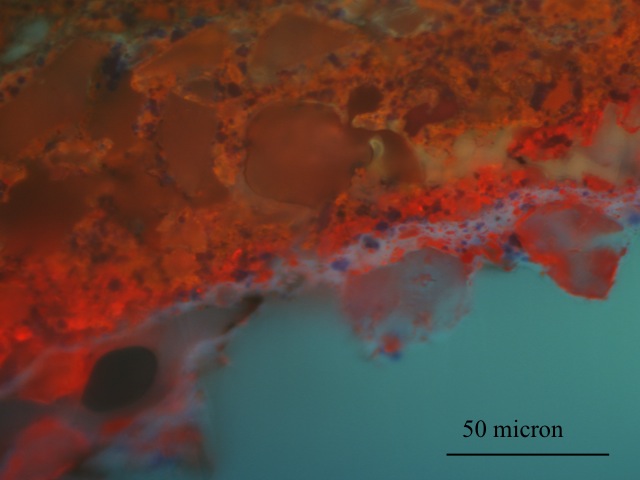 An important discovery is that Rothko was not using traditional oil paint but instead used diluted maroon-colored alkyd paints, phenol-formaldehyde paints or butylacrylate and for the glazes dammar resin and egg. Rothko did not use grounds but instead a colored size of proteinaceous glue with lithol-red, ultramarine, and barite as filler material. 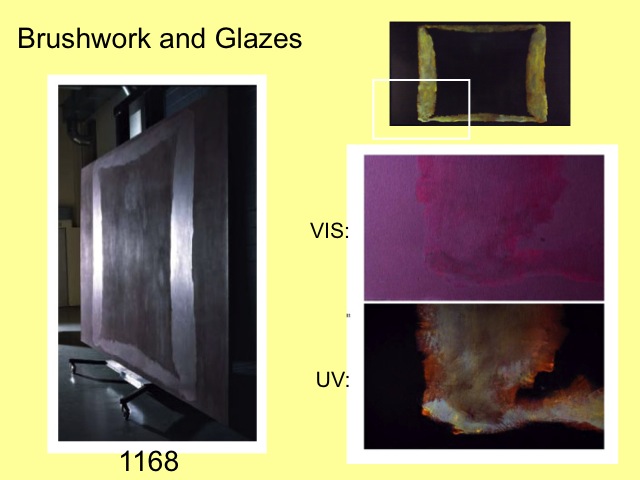 Most importantly, Rothko employed diluted paints in order to create a complex brushwork that would redissolve part of the earlier “dried” paint layers. He expressed his frustration when people praised his colors and would say it is not the color but the brushwork that makes my work so interesting. He wanted people to appreciate his work as close as possible: drowning in the work was his motto. Paintings were large and had to be standing on the floor instead of hanging. If you want to experience his work so close in the museum use binoculars to view it. 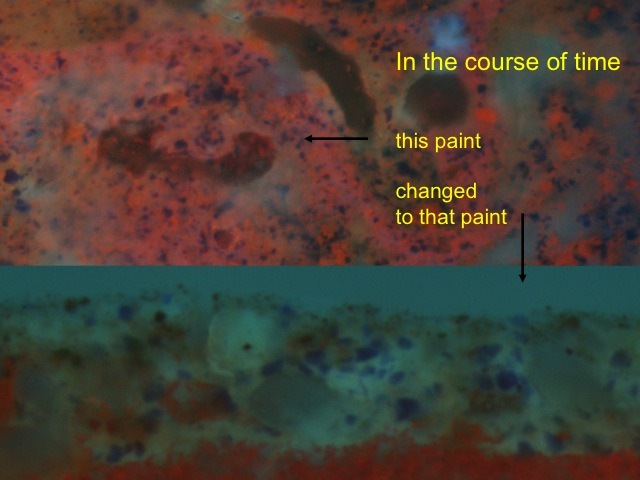 The surface of some of the Seagram Series paintings has suffered a lot. The lithol red is a fugitive color suitable for color pictures and advertisements in new papers but not for paintings. However, it is the combination of lithol red and ultramarine plus the dammar resins that creates a deadly combination leading to destruction of the lithol red molecule and degradation of the dammar binder in the glaze. The result is a grey vail that adds to the mystery but was never intended.

One of the paintings from the Seagram Series in Tate Modern (the 1170) was damaged in 2012 by words written in black ink on painting’s right lower corner. Extensive research was initiated at Tate to identify the ink and to find ways to remove the ink from the paintings surface. JAAP Enterprise worked with Hirox Europe Ltd and the Tate conservation team to build a suitable XY-stand for high resolution microscopy studies of the surface. Hirox microscopy pictures were taken with this setup in the beginning and at a later stage of the restoration. JAAP Enterprise also assisted with advanced microscopy and mass spectrometric studies.

In May 2014, the painting was presented again to the public after a highly skilled restoration by Rachel Barker and colleagues from Tate. The link gives a good impression of what had to be done to get there.