Some dripping paintings are intentional and can be found using Google Images. However, when an oil painting is dry for several years but then starts to soften and form drips, the artist maker is flabbergasted.

Paintings by contemporary painters Van Hemert, Walls, Youngermann, Meese and Tal R have been affected by a phenomenon that we describe as phase separation of the medium or exudation of a polar fraction of the oil medium, which is not anchored in the paint mass.

Paintings by Soulages, J-P Riopelle, Borduas, Matthieu, Appel and Jorn from the 1950’s are also affected. The phenomenon is often accompanied by other defects such as delamination, embrittlement, surface blooms, sticky surface exudates that attract dust.

How all these phenomena can be explained in one theoretical model is still under investigation.

Here we summarise some of the work that is underway or already in press. The exudates have remarkably strong UV fluorescence and are therefore easy to spot by conservators but have also been mistaken as additions of varnish.

Fluorescent drips of a Schmincke Fleischfarbe Norma 213 paint on a painting by Frank van Hemert (work from period 1990-1995): 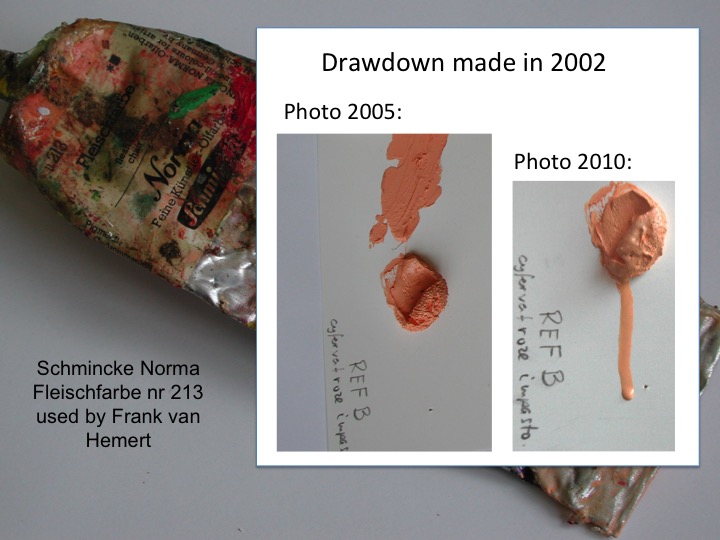 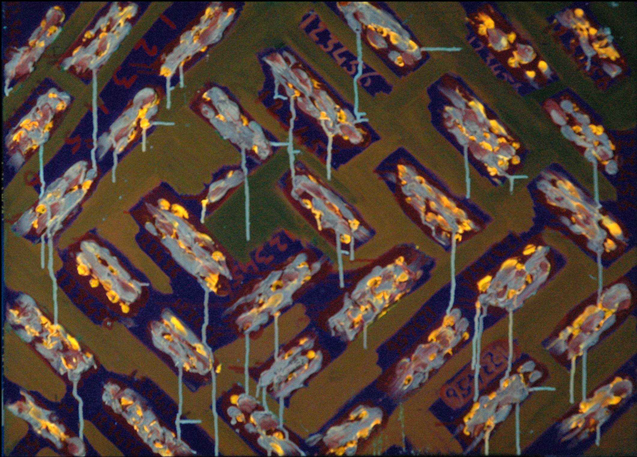 The phenomenon was reproduced when paint from the tube was painted out in 2002. Photos were make in 2005 and again in 2009/2010 when drips appeared.

While the team at AMOLF studied paintings by Van Hemert, Ida Bronken was working on paintings by JeanPaul Riopelle.

In the mean time, Boon and Lister from the Art Institute of Chicago investigated a painting by Piere Soulages from 1960.

Many paintings by Karel Appel show not only problems of delamination, premature cracking, paint loss but also exudation creating sticky surfaces, drips and metal soap aggregates at the surface. On the initiative of and guidance by Ida Bronken several scientists in Norway and myself are studying the origin of these problems and what can be done about it.